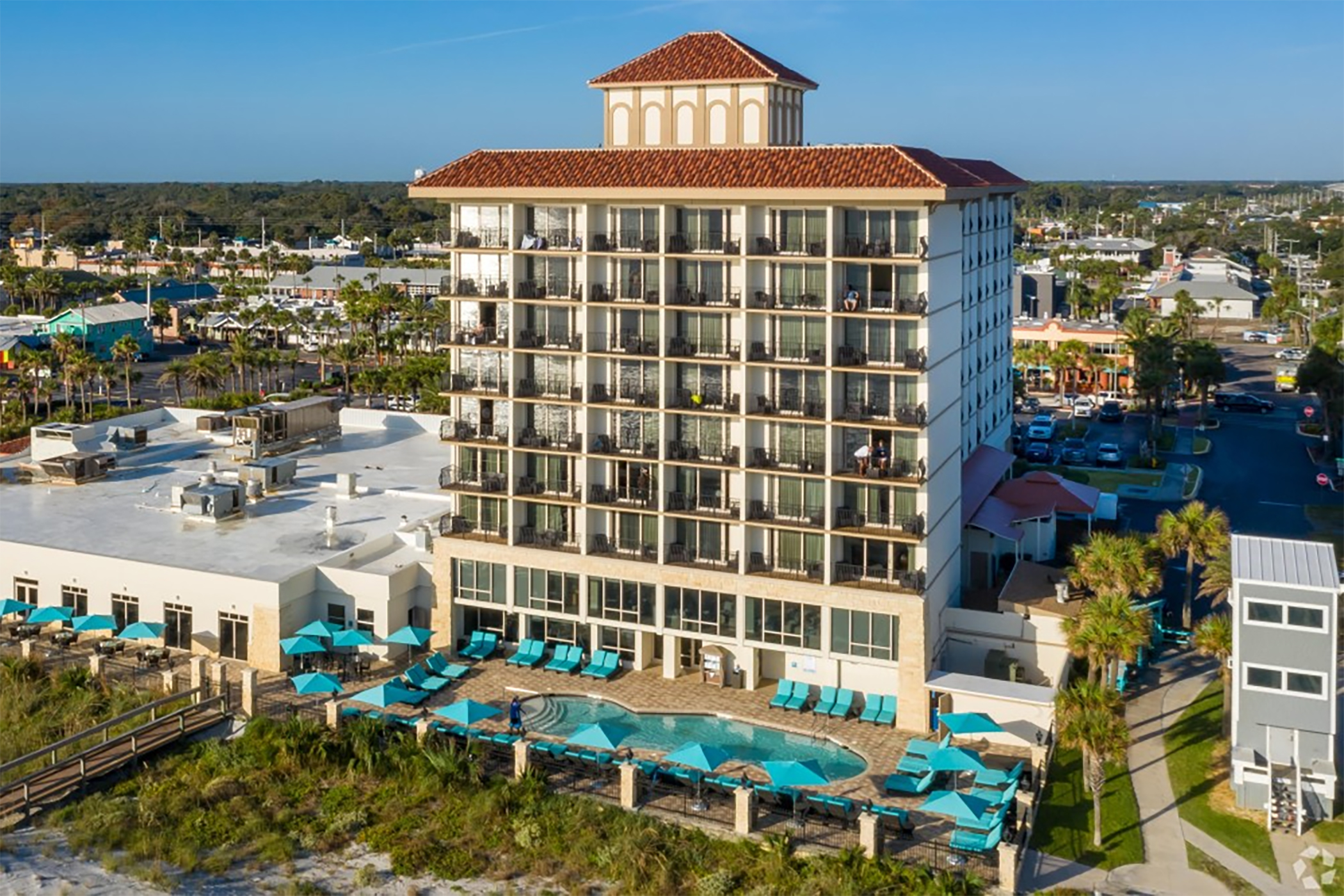 One Ocean Resort, an eight-story, 193-room hotel along the Atlantic Ocean in Jacksonville, Florida, is completely booked for Memorial Day weekend. (CoStar)

For a Texas real estate investment trust with ownership of 116 hotels and nearly 25,000 rooms throughout the United States, its hotel occupancy seemed to have bottomed out in mid-April as a result of the pandemic and hotel closings tied to government mandates.

The financial hit to Ashford Hospitality Trust, a publicly traded REIT based in Dallas, has left it unable to make principal or interest payments under nearly all of its loan agreements beginning April 1, leaving most of its hotel loans in default. In the case of two hotels, lenders have opted to accelerate the defaulted loans totaling more than $135 million.

In an “extraordinarily small” number of loans tied to undisclosed hotels, payments were made for reasons ranging from discussions with lenders to the ability to access certain financial accounts, said J. Robison Hays III, the trust’s newly named president and CEO, during a first-quarter earnings call.

“Our goal is to keep as many properties as we can,” Hays told investors during the call. “We are prioritizing our assets as to which ones will recover and which ones are in better equity positions. This will lead to a longer-term strategy of our assets and debt. As we sit here today, we are creating space to do that work by working with our lenders on three- to six-month forbearances.”

For the REIT’s accelerated loans secured by the Embassy Suites Midtown Manhattan and the Hilton Santa Cruz hotel along the California coastline, Hays said he plans to focus on trying to work something out with various lenders in the capital stack.

“This is our only asset in Manhattan proper and we want to keep it,” he said. “We are actively working on coming together for a solution. It’s an asset that’s housing a lot of first responders and workers and is losing money, but we’re hoping to work something out.”

In all, Ashford Hospitality Trust had $4.1 billion of mortgage loans at the end of the first quarter with a blended average interest rate of 4.4%, according to a filing with the Securities and Exchange Commission. For the first quarter, the REIT reported a net loss to shareholders of $94.8 million.

Like the Manhattan hotel, Ashford Hospitality Trust said more than 48 of its hotels have provided temporary lodging for first responders.

Meanwhile, leisure travel seems to be helping the REIT, as well as other hotels, with Ashford Hospitality Trust-owned hotels such as the One Ocean Resort in Jacksonville, Florida, and Lakeway Resort in Austin, Texas, both sold out last weekend by travelers seeking a reprieve from the pandemic. Ashford Hospitality Trust also expects the two hotels to be sold out Memorial Day weekend.

Ashford Hospitality Trust is one of two REITs, along with Braemar Hotels & Resorts, affiliated with Dallas-based Ashford Inc., that returned nearly $126 million of government relief funds meant for small businesses earlier this month after the government changed rules tied to the funding.

Months ago, before the pandemic took hold in the United States, Ashford Hospitality Trust tested the market by putting some undisclosed hotels up for sale, but pricing was estimated to be about 40% off compared to what executives felt the properties were worth. Some hotels could be put on the market again as the REIT looks to deleverage itself, Hays said, adding “anything and everything was on the table.”

“There may be a time when an asset sale make sense,” he said. “We could work with the lender to team up for a sale as part of us restructuring loans. If someone comes in with an offer that’s too good to say no to, the net proceeds would likely go to the lender to pay down debt to get our capital structure into a place where it needs to be today.”

Hays said he’s not fine with simply surviving the economic crisis caused by the pandemic, but is looking for ways to set up the company to grow, raise capital and flourish. He added the REIT came into the pandemic with too much leverage.

“Once we make our way through COVID-19, I anticipate we will spend some time analyzing lessons learned from this crisis and the past decade and will likely update the strategy of Ashford Trust going forward,” he added. “This could include changes to our leverage profile, capital stack, liquidity and investment strategy.”

During the Great Recession, the REIT ended up parting with three hotels, including one in Tucson, Arizona, another in the Chicago area and one in Dearborn, Michigan, he said. This go-around will be “materially worse than that situation,” he added.

Hays declined to disclose how many hotels he believed might be impacted by the economic crisis tied to the COVID-19 pandemic. He said he remains hopeful the REIT will be able to work out forbearance agreements with lenders, but the trust’s executive team are moving forward as if that might not happen.

“We don’t know what the lenders will do, we don’t control it,” he added. “Based on the depth of the problem this will be much more severe than the financial crisis and we are at risk of handing back a few [hotels].”